Radio Defined Between the discovery of the life-saving possibilities of wireless in 1900 and the broadcasting of music 20 years later, there were several terms used to describe communication without wires. In the beginning “wireless” was the common term for sending coded messages using spark, arc and vacuum tube between a single sender and receiver. It was the wireless telegraph. By WWI voice was becoming common in two-way communication and experimental broadcasting, and the terms “radio telephone,” “wireless telephone,” and “radio phone” described the evolution of the wired telephone into a wireless one. By 1922 the term radio was a commonplace description of the broadcasting of entertainment from a single sender to an audience of many.

Some of these radio stories explored values beyond just the technology. In one story an adult offers this social science perspective, a law enforcement person’s interpretation of the effect of the war on men returning from battle to find no job waiting: “It’s merely the aftermath of war. Men were taught to handle firearms and to kill their fellow men. The war ended, they were out of work, they pined for the thrill of danger and their viewpoint of life, of property and of right and wrong was distorted.” This opinion was offered 100 years ago. There are interesting issues in all of these stories, many of them in the news today, one hundred years later. For example the carrying of a gun on a college campus prompts this discussion between two radio boys in “Radio Boys Loyalty,” 1922: Talking to a fellow radio boy about the possibility that they will be hazed as new students, this radio boy plans to come prepared: “I guess it’s me for carrying a gun.” In the same story the boy with the gun is also disabled, a radio boy who uses a crutch because he was born with a twisted leg. When threatened with hazing he pulls out a pistol to which the hazers say: “You’re exempt of course. We don’t bother with cripples, kids, old ladies.” There are many instances in these stories that relate to the use of guns, sometimes matter-of-factly, other times there are deep discussions about the consequences of gun violence.

There were at least five separate juvenile series named the “Radio Boys,” some totally focused on the hobby of set building and receiving radio programs. Others were adventure-based, with the use of commercially-built radios for saving the lives of their young characters. Both boys and girls built the basic crystal receiver. In the 1922 Radio Detectives series, pictured below, the boys are shown using radio in familiar scenes, on the oceans and in far away countries. 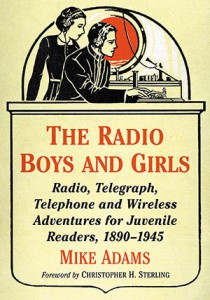